When the going gets tough, there is nothing like having a good friend extend a helping hand.

On or about Day 62, Karen went grocery shopping and threw a little something in her cart for me. “Look, this could be one of your cast-offs!” she enthused, handing me some packages. “And Dan is a fun guy!”

I didn’t have my reading glasses handy and couldn’t read the labels, so the fun guy comment zipped right past me as I studied what appeared to be large, yellowish … bath sponges?

Not quite. The packages contained dried white fungus (ah-ha, fun guy equals fungi!), a substance I had never heard of before.

Out of necessity, I have now done quite a bit of research. After all, one doesn’t just throw a bath sponge into a pot of water and call it soup.

Here are some the fascinating pieces of information I have discovered about white fungus.

• White fungus is flavourless and though it looks like it would have a slimy or gelatinous texture, don’t be fooled. The texture is hard to describe, but al dente is close.

• For more than 2,000 years, it has been highly prized in Chinese medicine. It is said to “nourish and moisten” the lungs and is good for the complexion. It’s also known for its cooling properties, removing a body’s “dryness” and “heat” by increasing body fluids.

• The mushrooms require a bit of prep before adding to a soup or stir-fry: soak, trim the leaves away from the core, cook, then add to your dish. During the soaking process, the mushrooms give off a bit of an ammonia-like smell and some websites encourage changing the soaking water to clear it off.

• Most recipe suggestions for white fungus are for simple clear soups; in parts of China, soup was served at the end of every meal often substituting for other beverages. Traditionally, white fungus was used in  “dessert” soups incorporating pears, figs, berries or sweet potatoes. When the production of white fungus was commercialized, bringing the cost down, it started to be used in savoury soups as well.

History, medicinal properties, a better complexion. The fact that I was still suffering a painful cough that had now lasted almost four weeks added to the attraction — a little bit of lung nourishment would be gratefully accepted.

This was intriguing, even magical, stuff.

With that in mind, and mindful of a container of mysterious frozen stock that I figured on using up, I opted for a savoury chicken soup. Given my western tastes, I also choose a recipe that incorporated the additional flavours of soy sauce, sherry and rice vinegar. It was good, but next time I’m keen to keep it simple — just broth, veggies, chicken and mushrooms.

Did you catch that? I said “next time.” Given that I thought I’d been handed bath sponges, the fact that there will be a next time speaks volumes about the magic of this particular mushroom. 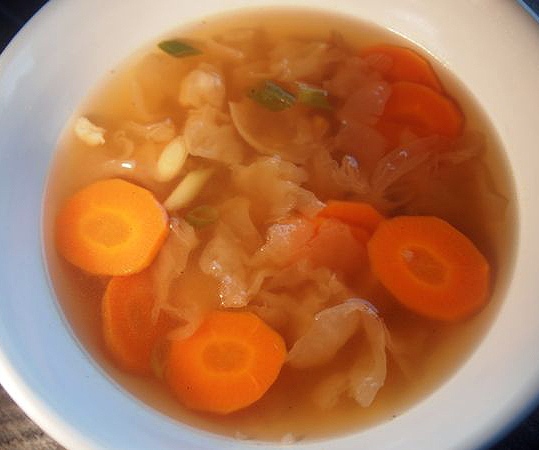 White fungus and chicken soup: the mushroom is almost tasteless, with a bit of an al dente texture.

Broth from the freezer (which turned out to be a beef broth) and some leftover cooked chicken used in the soup.

The donated dried white fungus, plus another one of Dan’s UFOs (Unidentified Frozen Objects) which we thought was chicken broth but ended up being beef broth. (That particular error didn’t work to the finished project’s advantage. But at least now we know what it was.)

This is how we did it

I read a lot of different recipes but referred most to these two from The Common Room and  Chowhound.

Soak the white fungus in warm water for about 15 minutes. If you want, change the water part-way through to clear away any odours. Once the fungus is rehydrated, you will cook it in boiling water for about 15 minutes. This will ensure the leaves are fully cooked. Drain and let dry (you can squeeze the water out if you like), then use scissors to cut off the leaves from the tough centre, which you will discard.

In a soup pot, combine the broth, water, carrots, chicken and soy sauce and bring to a boil. If you are using ground chicken, let it simmer for about 30 minutes until the meat is cooked and the carrots are cooked through to your liking.

Curious about my “Kitchen Castoffs” concept? Here’s the explainer describing my 100-day project.

Tell us what you thought about this article Cancel reply

Edmonton journalists Dan Barnes and Therese Kehler were inspired on their June 2016 Newfoundland adventure to start a blog. This one.

We figure it's a place to tell stories about our own pursuits of happiness, from getting out of town to getting crazy in the kitchen.

We don't really know where we're going — but the fun is in the getting there.

There was an error retrieving images from Instagram. An attempt will be remade in a few minutes.

Our stories by category

Life's a journey. Enjoy the trip

Seen and Heard in Edmonton