Mundare has every reason to be proud of its links, both sausage and golf.

Stawnichy’s Meat Processing, the iconic family-owned business that put this tiny Alberta town of 850 people on the map, has sold more than 20 million smoked sausage rings in the past 57 years.

Whitetail Crossing Golf Club, on the other hand, has been up and running only since 2007, when the first nine holes opened for business. The other nine was launched in 2011, and together they form an estimable links-style challenge for golfers of every stripe.

Thankfully, there is a convenient blending of Mundare’s most iconic establishments in the Whitetail Crossing clubhouse. A standup cooler in the corner stocks Stawnichy’s products, and after a delightful four-hour round on one set of links, we happily partook of the other.

You probably already know how good their Ukrainian sausage is. But take my word for it, the beef jerky is absolutely killer. And Therese said the pepperoni/cheese stick combos are the perfect golf day snacks. Had we spotted the cooler before teeing off, there is little doubt we would have been noshing away on the front nine.

That said, we did have our hands already full with Whitetail’s wetlands, tall native grasses, undulating fairways and massive waste bunkers. Navigation demands some canny course management, and driver is not necessarily the first choice on the white or blue tee box on a handful of par-fours.

Whitetail is a Puddicombe Golf design, and it’s a pleasant, player-friendly (if somewhat repetitive)  track.

Whitetail Crossing is part of a planned community on the edge of Mundare. Once you’ve turned north off the Yellowhead Highway, you’ll make a left turn about two kilometres in onto Whitetail Road then another left onto Whitetail Drive. There aren’t any obvious golf course signs, sadly, nor did we see any street name signs but your GPS will get you into the parking lot. Know this: if you can see the big sausage, you have gone way too far.

Antlers showed up on a couple of the tee box signage displays at Whitetail Crossing Golf Club in Mundare.

A view from the tee box at number 17 at Whitetail Crossing Golf Club in Mundare. Golfers are up against water, sand, elevation and more on this par 5 hole. 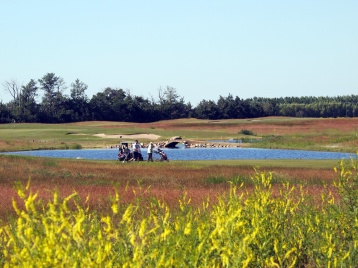 One of several “waste bunkers” on the Whitetail Crossing golf course, this one — with standing water and grass – flanks the first green. 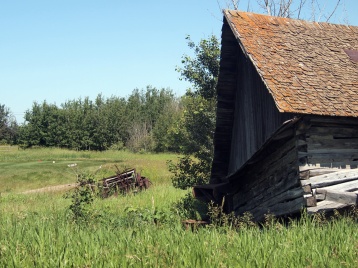 This falling-down structure and farm equipment sit between holes on the front nine of the Whitetail Crossing golf course. It’s a nice reminder of the region’s agricultural history.

The back nine of Whitetail Crossing meanders through part of the new residential neighbourhood.

Another of the giant waste bunkers at Whitetail Crossing Golf Club, these ones on number 18. Dan got out of this one, only to land in the next. 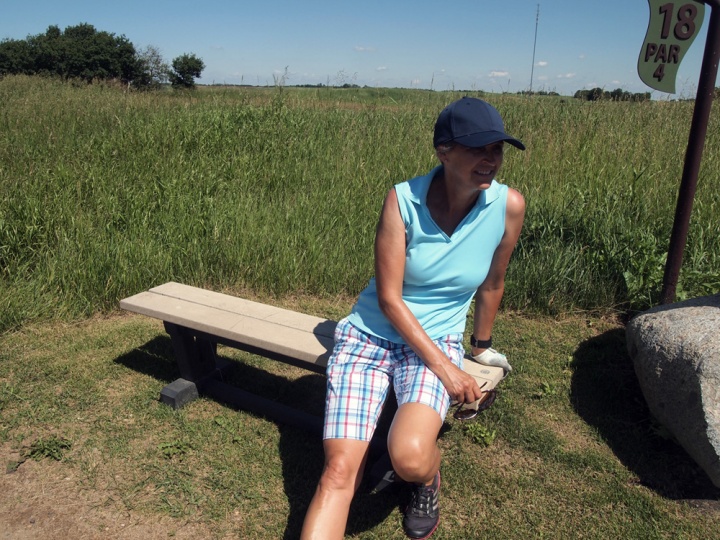 Time for a rest. The course is flat and good for walkers. We didn’t see a ton of benches, but this one on number 18 was a welcome site.

As long as you are in the area, you really ought to go check out the big things: the giant sausage in Mundare and the huge Easter Egg in Vegreville.

In many prairie towns, the water tower is the tallest structure. Looks like the Mundare Sausage gives it a run for the title. 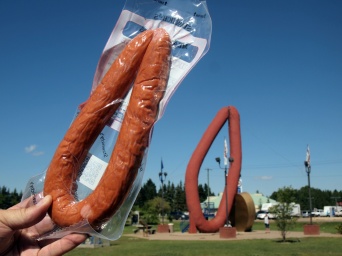 See the resemblance? We bought the famous Mundare sausage at the Whitetail Crossing Golf Club. (The Stawnichy’s location in Mundare is closed on Sundays.) 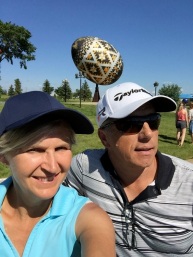 By the numbers: There are five decks from which to choose, ranging in length from 5,406 yards on the reds to 7,083 at the tips.

Course deals: Their twilight rate of $37 plus GST is a good one, since it kicks in after 2 p.m. each day. A sign in the pro shop advertised “Free Cart Thursdays,” which can save a golfer who wants to ride $16 plus GST. There are a number of promotions on their website which can save you a few bucks, especially on the multi-round punch cards. The golf course website also features an “E-Club” that offers online specials and a free round on your birthday. Not really sure how that works for we Pisces kids.

Defining characteristics: The wetlands were the showstopper for us, especially on the back nine where they were big, beautiful and too often in the way of what was otherwise a perfectly good drive.

Walkability: As with most links-style courses, it’s not too taxing. Our FitBit says we walked about nine kilometres, which includes a few longer treks between holes on the back nine. Some tee boxes had benches on which you could take a rest. Shade is scarce  — think about it, this is pretty close to golfing in a field of canola. When the heat is up, wear a hat.

On-course amenities: They don’t go overboard here for the casual golfer. The clubhouse/pro shop is a modest establishment, and there isn’t a full kitchen on the premises. They do hotdogs, beer, pop, chips and the like. The refreshment cart person gets to you at least twice, maybe three times, and the clubhouse attendees are friendly and informative. And, as aforementioned, there is Stawnichy’s on site! For tournaments and league play, they can fire up the outdoor barbecue — or bring in a pig roaster — to satisfy the culinary demands of a big party.

As long as you’ve made the drive: Mundare calls itself a small town with a big heart. It also has a big sausage. The 12.8-metre high kobasa is a testament to good-tasting sausage, if not to good taste. It’s right there in the middle of town. It’s impossible to miss. Huge. And brown.

If you don’t mind driving a little further east, Vegreville and its massive pysanka is just 20 kilometres away on the Yellowhead. Every big sausage needs a big egg. That, my friends, is the circle of life.

In this Drive Time series, Road Wordy will spend the summer finding some hidden golf gems easily accessible to Edmontonians as a day or overnight trip. Here are some our previous stories:

•  Barrhead raises the bar for country golf
•  Can’t hit the fairway for the trees at the Sundre Golf Club
• Into the black sands at Coal Creek
• Dan Barnes: Golf, the original social network

Do you have a suggestion for a golf course we should try? Tell us about it in the comments and maybe we’ll pay it a visit.

View all posts by Dan Barnes

1 thought on “Golf and sausage: slices of life in Mundare”

Tell us what you thought about this article Cancel reply

Edmonton journalists Dan Barnes and Therese Kehler were inspired on their June 2016 Newfoundland adventure to start a blog. This one.

We figure it's a place to tell stories about our own pursuits of happiness, from getting out of town to getting crazy in the kitchen.

We don't really know where we're going — but the fun is in the getting there.

There was an error retrieving images from Instagram. An attempt will be remade in a few minutes.

Our stories by category

Life's a journey. Enjoy the trip

Seen and Heard in Edmonton